Young kiwi kids are getting almost half of their energy intake from ultra-processed foods like bread and crackers, according to new research.

The Prevention of Overweight in Infancy study by the University of Otago’s Edgar Diabetes and Obesity Research Centre, found that by 12 months old, New Zealand children were getting 45% of their dietary intake from ultra-processed food. That increased to 51% by the age of five.

Researchers studied more than 800 Dunedin children from birth over the past 10 years for the study.

It found that breads, yoghurt, crackers, cereals, sausages, and muesli bars were among the processed foods making the “greatest contribution” to young children’s diets.

The study defined ultra-processed foods as typically energy-dense products that were high in sugar, unhealthy fats, and salt, while being low in dietary fibre, protein, vitamins and minerals.

Lead author Louise Fangupo said food preferences and eating habits often developed early in life and could track right through childhood and adolescence into adulthood, so developing healthy habits early had both short and long-term benefits. 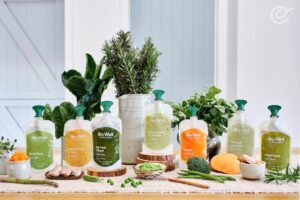