The Warehouse Group is watching the government’s response to the recent Commerce Commission market study of the grocery sector “with interest” as it weighs up its next steps in its F&B strategy.

It has also launched its own brand range called Market Kitchen, which included products such as flour, dried fruit, nuts and sauces, with new products set to be rolled out to join the range in the coming months.

“Kiwi families tell us that they’re not getting good value from supermarkets and they want to have more grocery options available at The Warehouse,” he said.

“It’s something we’re seriously considering and we’re watching with interest to see what steps the government will take to make a difference to New Zealanders and allow other players like us to enter the grocery market in a bigger way.”

He also said the company has enjoyed a “fantastic” response to a price drop it launched a month ago.

On 13 April, The Warehouse announced it would keep more than 200 F&B and other items that it considered essential at value prices. This included its 500g of Goodman Fielder’s Tararua butter for $4, a two-litre bottle of milk for $3, and 1.2kg of Sanitarium Weet-bix for $5.

Since then, Countdown has announced its Great Price Winter Freeze and Foodstuffs has launched a price rollback on more than 100 items.

“The response to our $4 butter has been fantastic and we’ll continue to maintain this price as long as we can,” Grayston said.

“Making sure Kiwi families can afford a great breakfast is something we’re very committed to and our breakfast basket is still more than $6 cheaper than the major supermarkets, despite their recent price drop announcements.”

“While the cost of goods continues to increase, we’re holding or dropping prices where we can across essential grocery and pantry items like bread, milk, cereal and pasta,” Grayston said.

“For some products, there will be unavoidable cost increases, but you can expect to see us continue to look after our customers through the winter with everyday low prices.”

The value retailer reported an overall 2.5% drop in third-quarter sales compared with the same time last year. In the 13 weeks to 1 May, sales came in at $771.6m with in-store foot traffic down 13% as a result of the country being in the Covid-19 red setting for 74 out of Q3’s 91 days.

The Warehouse does not break out its F&B performance in its publicly released results. 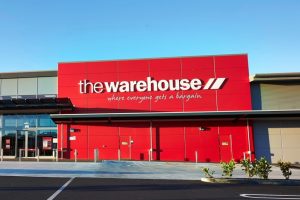