Hell’s Pizza has launched a natural hemp-based chicken pizza as an alternative to its Death by Chicken menu item.

The pizza was made with locally produced natural hemp-based “chicken” – replacating the original buttermilk fried chicken, and gave the pizza a new name – Death by FrankenChicken.

Death by FrankenChicken featured a hemp product developed by Sustainable Foods in conjunction with Greenfern Industries and The Riddet Institute.

Hell’s said the limited-release pizza came standard with bacon and was targeted at flexitarians, but could be customised to be meat free. The hemp-based chicken was fried in the same oil as seafood and chicken. 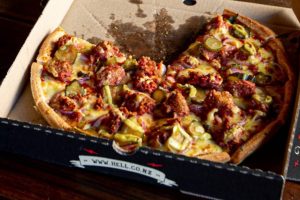