The world’s best-known farm to table chef, Dan Barber, gave the keynote speech on Tuesday at this year’s Eat NZ Food Hui. In conversation with Eat NZ chief executive Angela Clifford, the US chef, author and co-owner of Manhattan’s Blue Hill restaurant discussed the web of relationships in a food system, how to convince a commodity-based food system of the importance of culture, and the “lunacy” of fake meat as a solution to the pitfalls of modern agriculture.

Angela: In New Zealand, our food system has a colonial history of production of ingredients for meat and milk for export is focus, in your book The Third Plate, you write good food cannot be reduced to single ingredient and that it requires a web of relationships. What role does culture play in an understanding of the web and how do you convince a commodity based food system of the importance of food culture?

Dan: A commodity-based food system is a colonial system by another measure, connecting the two realities that are often not connected.

Colonialism, from an agricultural point of view, is based on the belief rooted in extraction. It is extractive, and the food system that big agri-business corporates and multinational companies are dependent on is extraction which is colonialism by another name.

That you are owning the microbial communities of soil by extracting as much from the soil microbial community as you can without feeding and replenishing the soil, and parts of soil that give it life and give us nutrition. It is taking out from the bank without repaying the bank – it is extractive.

And the reason culture is so important is that when agriculture is divorced from culture, you allow extraction. When it becomes a part of the web of what it means to be a New Zealander and what it means to be connected to land it is much more difficult to think about agriculture in a way that it is just vegetables, or grains or tubers or animals. It becomes about a whole web of relationships.

What we have to come to grips with today, for the sake of the future of food, is to understand a system of agriculture that respects culture and respects place, and that is not suited to an export economy or an extractive agricultural system.

To be truly regenerative – a popular word right now – is to produce food that we don’t look at as less bad for the environment, but as truly improving the ecological and environmental reality of the place that produces the food.

That is a very interesting food system, and for more as a chef, one where the most delicious food comes from.

Angela: If an extractive food system is a colonial food system, what is the importance of an indigenous food system in terms of understanding food culture?

Dan: The wisdom of indigenous food systems is holistic. It is about taking from the land in a way that replenishes the land – that is at the root of all indigenous thinking about culture and agriculture.

This is a late revelation to me – I am very Euro-centric in my history and my training and there are a lot of pitfalls with that.

One of which is colonialism, as you’ve mentioned, the other is my understanding of indigenous cultures and how farming and foraging worked in tandem with cultural mores and ultimately religion and medicine and health and pleasure, which is a whole other subject.

I have come to understand in most indigenous cultures the best doctors were the best chefs. In Western civilisations, you get that sense that the bifurcation of food and medicine is there because the medicine is there to intervene when there is a problem. In indigenous cultures, you didn’t have that opportunity to intervene with advanced medicine and you used food and the culture helped dictate the pattern of eating, that supported the landscape and environment around you and health.

What I like about that is that it is so analogous to an organic system of farming. The root of organic comes from the word organism which is a whole – it is really indigenous in its origin – in that it was about the whole utilisation of a resource.

The true organic movement gave a nod to that, it tethered itself to this indigenous philosophy, it wasn’t just about how you were producing food, but who was producing it and how it got to you – these were all questions as part of the organism.

Those are the connections – that is the web of food – that is critical to our understanding of how we should create a framework for a food system of the future.

I have been thinking a lot recently about the influence of corporations and technology, there is so much consciousness all of sudden around the pitfalls of the kind of agriculture we have. But the solutions are so misguided, they are all wrapped up in technological fixes for agriculture whether it is hydroponic farming or GMO farming or on the food side it is ‘get rid of the cow and replace it with the Impossible Burgers of the world and fake meat’ – it is so misguided and actually it is kind of lunacy.

What we need to do in that sense is get back to this indigenous understanding of food as a part of agriculture, in the sense of what we eat and how we eat and how it goes to support the kind of world we want to live in. It is very powerful and very complex – like an organism.

Unfortunately, we are in a world today that speaks in a language of technology – technology is the A to B solution. Biology is very complex, very inefficient and it is very hard to put a label on a true biological system.

As a chef, my advocacy of a biological system is based on the fact that it tastes better and in America taste and pleasure is a big driver. I continually show how a biological quasi-inefficient system that is truly organic takes this web of relationships into consideration in producing food absolutely produces the most delicious and healthy food.

As Americans, we are a little bit greedy so we work very hard at paying a little bit more or going out of our way for pleasure.

Angela: Here in New Zealand we are only just starting to understand what happens when you disconnect food and health and trying to find a pathway back to that.

Dan: By the way, one of the pitfalls for New Zealand, and it is similar for America, in why colonialism makes so much sense is that you have such a rich ecological existence.

When you have a rich ecological existence you think ‘OK, there is so much that can be produced and therefore it is possible to allow corporate interests to produce food in an extractive way’. Actually, it is the opposite, it is the ecologies that are rich and have great depth that allow for monocultures.

Those areas of the world those environments that are difficult to grow food in have some of the most interesting food traditions and agriculture traditions surrounding them – not extractive because there isn’t the interest in the land or the wealth to extract them.

America is hobbled by the fact it is so rich – part of the reason our food culture is so miserable is because we were never forced to make negotiations between crops, we can always live high on a hog.

Then you introduce technology in the last 100 years fertilisers and pesticide and machinery and you understand how our agriculture has not only been a breadbasket for the world but it has over-fed our population without any kind of dictates about a cuisine.

Now there is a real fork in the road. In what direction do you go? Do you double down on the tech and chemical driven agriculture? Or do you recognise and appreciate the indigenous cultures that did not have the luxury to do that? How did they approach feeding? And in the spirit of deliciousness because you end up with a culture and cuisine that really celebrates food and farming.

That would be my take on the future of food – that is where we are headed. With a lack of choice, with limits, we are going to be pushed towards an eating culture that is much more dynamic and interesting – and delicious.

This conversation was edited for clarity. The Eat NZ Hui 2022 continues in Ōtautahi/Christchurch today with the one-day Eat NZ Grains events. 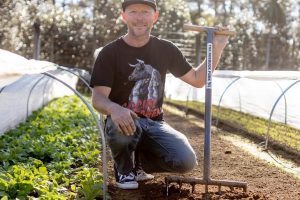 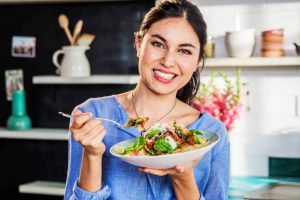 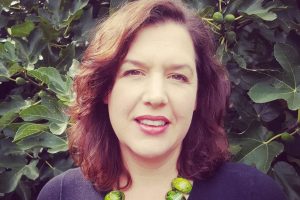